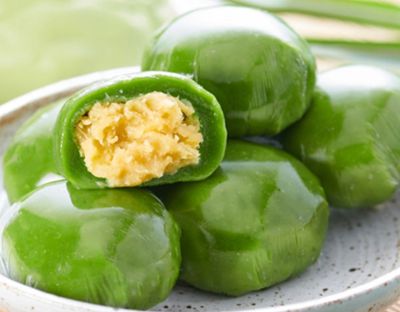 A sweet treat in spring 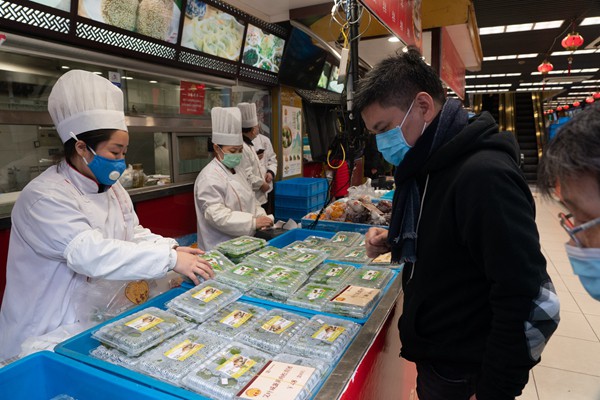 Despite the COVID-19 epidemic, business has been brisk for restaurants selling green glutinous rice balls, a staple snack in spring, Xing Yi reports in Shanghai.

With Qingming, or Tomb-Sweeping Day, approaching, long lines of customers have become a daily scene in front of the Ningbo Tangtuan store in the Yu Garden shopping arcade in downtown Shanghai.

The time-honored brand which specializes in sweet desserts has enjoyed such popularity every day since it started selling qingtuan, a green glutinous rice ball that is a popular dessert in spring for Shanghainese and those from the lower reaches of the Yangtze River.

"Despite the novel coronavirus outbreak, we sold more than 400 servings of qingtuan on March 2, the first day we started selling this snack," says Li Yaohua, one of the chefs of Ningbo Tangtuan.

"Because of the outbreak, many of our customers this year ordered online instead of coming to the shop in person."

Li expects to sell around 5,000 servings a day during Qingming, which falls on April 4 this year. The reason for this is qingtuan is a must-have offering that people place on the tombs of their ancestors or family members.

Apart from sticky rice, another important ingredient used is mugwort, an aromatic herb that is often used to treat asthma, inflammation and infections. The leaves and buds of the mugwort, which are picked right after the arrival of spring, are smashed and turned into a juice that is used to soak the rice dough, giving the snack its distinctive green hue. 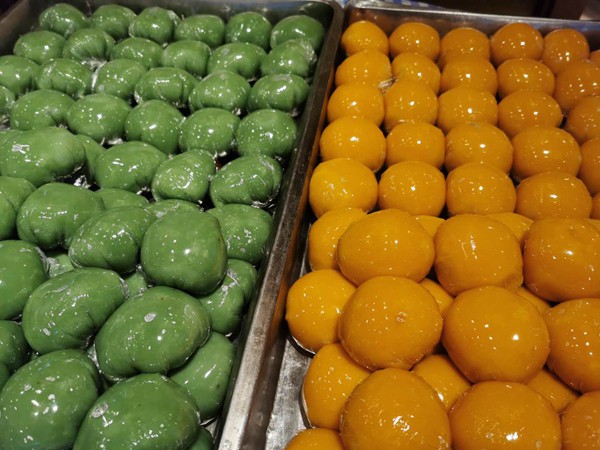 Qingtuan, or glutinous rice balls that are typically green, are a popular dessert in spring for Shanghai residents and those from the lower reaches of the Yangtze River.[Photo provided to China Daily]

As the cultivation of mugwort requires moist soil, the plant is mainly grown in the Yangtze River Delta, where the conditions are ideal. The region is also home to many qingtuanproducers.

Besides being a delicious snack, qingtuanalso provides an opportunity for families to get together. Li Yuan, who grew up in Anji, Zhejiang province, is one of those who, together with his parents, make the glutinous rice balls from scratch.

Since he was a child, Li has spent most of his spring weekends plucking mugwort and bamboo shoots with his parents. As he currently works as an editor in a publishing house in Beijing, he now freezes the qingtuanbefore bringing it back to the Chinese capital.

"It's not as fresh as eating it back home, but it will do. I just love the taste and want to retain a sense of nature in the metropolis," says the 30-year-old.

The qingtuanthat Li and his family make are filled with diced bean curd, bamboo shoots, garlic and pickles, giving the snack a savory taste. Most of the qingtuan found in shops, however, are sweet.

While the most common fillings include red-bean or black-sesame pastes, many businesses have been introducing new flavors every year to set themselves apart from the competition.

For example, in 2016, Shanghai dessert maker Xing Hua Lou debuted a kind of qingtuan which was filled with egg yolk and dried pork floss. This variation is still popular with customers. 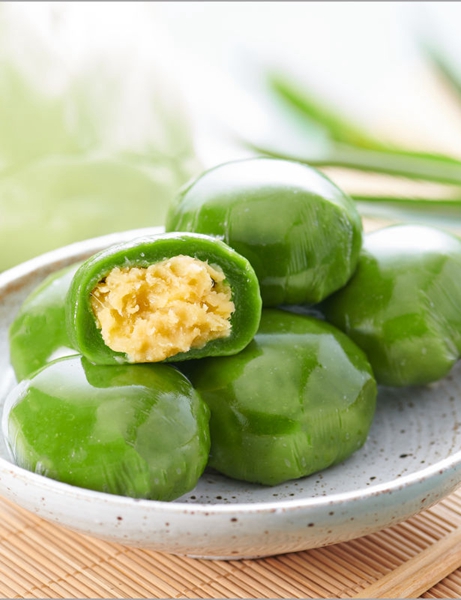 Qingtuan, or glutinous rice balls that are typically green, are a popular dessert in spring for Shanghai residents and those from the lower reaches of the Yangtze River.[Photo provided to China Daily]

This year, Xing Hua Lou has introduced new savory options such as sliced chicken with bacon and beef with cheese. Other shops like Shen Da Cheng are selling a milk and mocha-flavored qingtuanwhich resembles the Japanese dessert mochi, while Ningbo Tangtuan has released a version with durian paste.

According to Li, the paste is made by mixing butter with durians imported from Malaysia, a country renowned for its production of the fruit.

Despite its pungent smell, the durian snack has proved to be popular among customers, accounting for one-third of the shop's total qingtuansales.

Although stores usually sell qingtuanthat are refrigerated or stored at room temperature, Sun Wenji, who grew up in Suzhou, Jiangsu province, says freshly steamed ones taste the best.

"Qingtuan is best eaten hot. This is when you can smell the refreshing aroma of the reed," Sun says.

Despite its popularity in the Yangtze River Delta, qingtuan has yet to become a national snack like the zongzi, which is consumed during the Dragon Boat Festival in summer, or the mooncake, which is staple during the Mid-Autumn Festival.

As such, Sun has had to settle for refrigerated options that she buys online as the snack is difficult to find in Beijing where she currently works.

"I really miss the qingtuanfrom home," she says. "But I guess having a cold qingtuan is better than nothing."