The meeting was also held to make arrangements for the epidemic control in the next stage. 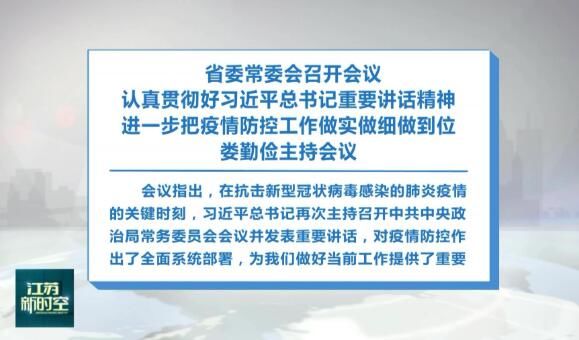 At a critical moment in the fight against the pneumonia epidemic of the novel coronavirus infection, General Secretary Xi Jinping once again presided over a meeting of the Standing Committee of the Political Bureau of the Central Committee of the Communist Party of China and delivered an important speech, making a comprehensive and systematic deployment for the epidemic prevention and control, which is the most direct mobilization of prevention and control work and provides important guidelines for us to do a good job in the current work, according to a meeting released after the meeting.

The meeting also made arrangements for the prevention and control of the novel coronavirus epidemic in the next stage.

In the previous stage of epidemic prevention and control, various localities and departments worked together and adopted a series of effective measures, the statement said.

We must take the initiative in prevention and control, implement various measures, strictly prevent imported cases from outside of the province and spread within the province so as to block the source of infection, the statement said.

Measures should be taken to strengthen prevention and control measures to help curb the spread of the novel coronavirus during the return journey of the Spring Festival travel rush, register all close contacts and those from key areas with high incidence of the epidemic, make medical observations of people from the infected areas and isolate suspected patients and close contacts, according to the statement.

Law enforcement agencies should make a criminal case for those who spread the epidemic intentionally although they are aware that they have been infected, the statement said.

More efforts should be made to better communicate authoritative information about the pneumonia situation caused by the novel coronavirus and explain the policies and measures taken to control the outbreak, according to the statement.

Intensified efforts are urged in distributing authoritative and targeted information to respond to public concerns in a timely manner, as well as promoting knowledge on the prevention and control of the epidemic, said the statement.

Improved management of cultural and tourism activities is called for to cut off the spreading of the epidemic on such occasions, the statement said.

The meeting also called for greater efforts to speed up the manufacturing and secure the coordinated supply of key medical products to help curb the epidemic caused by the novel coronavirus.

Donated materials must be open, transparent, and searchable, and deployed in a timely manner, the statement said.

Methods should be taken to meet the needs of the people, strengthen material reserves, ensure the supply of vegetables, meat, eggs, milk, food and other essential necessities, keep the necessary service places such as farmers' markets, supermarkets, etc. open in accordance with regulations, resolutely crack down on behaviors such as price gouging and hoarding so as to maintain the market order and expected stability, said the statement.

The Standing Committee of the Political Bureau of the Communist Party of China Central Committee held a meeting Monday in Beijing on the prevention and control of pneumonia epidemic caused by the novel coronavirus.

Xi Jinping, general secretary of the CPC Central Committee, chaired the meeting and made an important speech

On behalf of the CPC Central Committee, Xi expressed respect to those fighting on the front line of the battle against the epidemic and extended greetings to patients and their families.

Xi pointed out that the most crucial task for the moment is to execute the arrangements to the details and called for prompt and resolute actions in containing the spread of the epidemic.

Xi also demanded resolute opposition against bureaucratism and the practice of formalities for formalities' sake in the prevention work.

The meeting stressed giving full attention to the prevention and control work in areas hard-hit by the virus.

Resources for treatment, prevention and protection must be sent to the front line of the battle against the epidemic and priority should be given to meet the needs of frontline medical staff and patients, according to the meeting.

Hubei province, especially its capital city Wuhan, remained the top priority for the epidemic prevention and control work across the country, it added.

The meeting called for all-out efforts to treat the patients, ensure the supply of medical protection materials, improve the admission and survival rates, and reduce the infection and mortality rates.

The meeting underscored the need to systematically review the areas of weakness in the national reserve system, enhance reserve efficiency and capacity, and improve the production capacity for essential supplies.